From October 7 to 9, 2022, L.A.M.P. conducted its inaugural Fall Weekend Retreat in the mountains of Wrightwood, California.

At the Washington DC Experiential Excursion in June 2022, during our nightly reviews of the past day’s events and while sharing their opinion on each graduating senior on the trip, each Mentee acknowledged the value of sharing space with other Mentees at the monthly workshops on Saturday mornings however, they also expressed concerns that they did not have much opportunity to really get to know his fellow Mentees “on a personal” level within that format alone.

After listening to what was a common theme, the L.A.M.P. leadership team decided to add a new module to the L.A.M.P. program, the Fall Weekend Retreat. 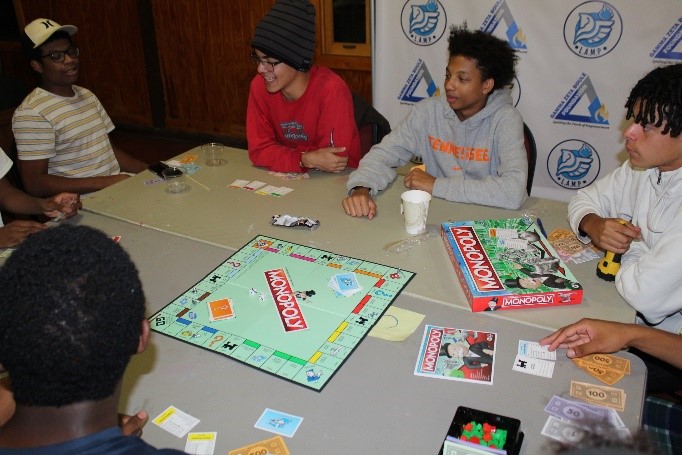 At the Camp in the mountains of Wrightwood California, the Mentees participated in several Workshops and activities that helped ensure that each Mentee got to know each other. Each Mentee was tasked to know at least “three things” about each of the other Mentees that they did not know before. This was the fundamental requirement to be completed before the weekend was over.

The primary goal of this Fall Weekend Retreat was to encourage the Mentees to bond with each other, to form a Brotherhood, a fraternity of “like-minded brothers” that should last long beyond their time in the L.A.M.P. Program and serve them well as they maintain this connectivity through-out their academic, and professional careers.

These bonding events occurred through several activities which included – group discussions on the Book, “The Art of War”; Time Management Workshop exercises; Rockwall climbing; Archery; and numerous other events. During the short breaks the Mentees took it upon themselves to play Football; Basketball and other games including Hide and Seek in the dark among trees in the mountain. On Saturday night after dinner and the evening workshops concluded, the Mentees played indoor games that included Uno, Checkers, Chess, and Monopoly with one also sharing his skills on the piano. It was simply an amazing experience to see these potential future real estate moguls, whom we know today as Mentees, on-the-fly developing plans and alliances to control the financial fantasy world of Monopoly.

In their journals, each Mentee commented on how valuable and impactful the Retreat was to him and that the goal of getting to know the best of other Mentees was achieved. Since the Retreat, it is common practice to randomly call upon any Mentee to ask him to say three things about another Mentee, and that process is kept going for a period of time at the outset of the Ice Breaker.